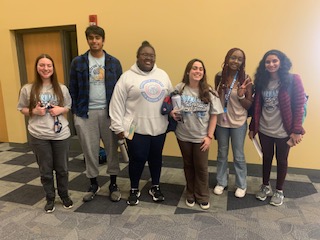 Knights Journalism took State head on with Anna Witt finishing third in Infographics and Varun Gullapalli taking sixth in Headline Writing. North had six students from the Knights Media make it to State.

Every student that competed at Sectionals placed; this means everyone was in the top six in their respective categories. Witt took inspiration from previous winners and did research before State.

“After I realized I qualified for State, I just went on the internet and looked up videos about graphic design and just made a bunch of practice layouts,” Witt said.

Teacher Brenda Smith helped get her students prepared for State by showing them previous winners, looking over rubrics, and overall encouraging the students at Sectionals and State. Smith was very pleased when everyone competing placed at Sectionals, making history as North has never achieved this before.

“We looked over all the prompts and we talked about how to do things, but they are already awesome because they do everything related to journalism so well. I was super proud of how we did at Sectionals.

Going into State, the six people that advanced worked hard and practiced again just like before Sectionals. The Knights competing had a little nerves going to Sectionals but were able to best them making it to State and having that experience.

“I was pretty nervous about going into Sectionals, but last year was my first time, so it wasn’t as nerve racking, and I placed last year. I was just hoping to go to State for one of the categories I was in. I am definitely nervous for State too, just because not a lot of people competed in the category I am going to State for so I am interested to see where I’ll fall with rankings. It’s giving me great experience for future opportunities,” said senior Lilien Salas.

Gullapali found creative ways to practice before State and overall found a way to be more creative to place at State for Headline Writing.

“Just getting better, being more creative. One thing I really like to do is use colons in my headline, but sometimes if you use something a little too much it becomes less original. Focusing on making each and every headline as original and creative as possible,” Gullapalli said.